FirstBank Celebrates 2021 Corporate Responsibility and Sustainability Week, Calls for All to Adopt Kindness as a Way of Life 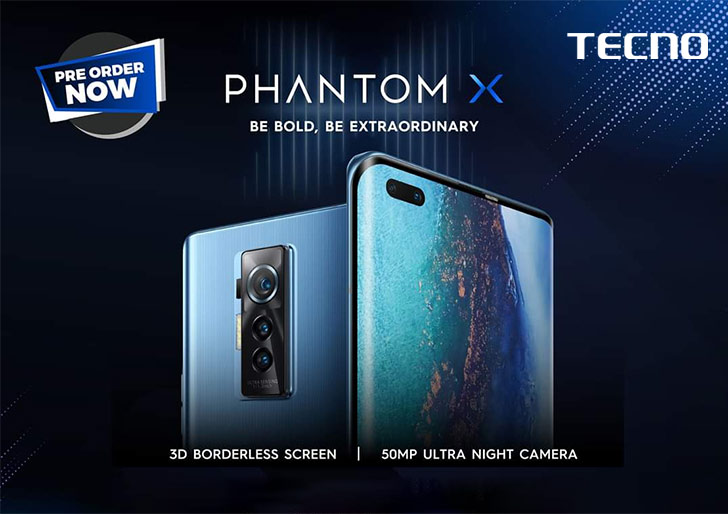 TECNO is working to launch a new PHANTOM X smartphone, as confirmed by various teasers released by the company. The company’s Ivory Coast division has now shared an image of the phone, revealing its front and rear design. Separately, TECNO has started accepting pre-orders for the handset in the Democratic Republic of Congo, hinting at its imminent launch in some markets.

A new wave for the BOLD and EXTRAORDINARY is coming.
If you guessed #PHANTOMX, you were right!
Let’s see how many words you can think of that start with E and are related to extraordinary?
Excellent, Explore, Exclusive…. It’s all here at #PHANTOMX #BeBOLDBeEXTRAORDINARY pic.twitter.com/fgCJwcPvV6

It will offer a 90Hz AMOLED display

The TECNO PHANTOM X will feature a pill-shaped cut-out, slim bezels, curved edges, and an in-display fingerprint reader. On the rear, it will sport a triple rear camera.The handset shall bear a 6.7-inch Full-HD+ (1080×2400 pixels) AMOLED screen with a 20:9 aspect ratio and a 90Hz refresh rate.It will likely be available in Van Gogh Sky Blue and Monet’s Summer Garden colors.

A 50MP main camera is expected

As per the leaks, the TECNO PHANTOM X will sport a triple rear camera setup, comprising a 50MP primary sensor, a 13MP secondary lens, and an 8MP tertiary camera. On the front, there will be a 48MP+8MP dual-lens setup.

The phone will support 33W fast-charging

The TECNO PHANTOM X will draw power from a MediaTek Helio G95 processor, paired with 8GB of RAM and 256GB of storage.Under the hood, it will run on Android 11-based HiOS and house a 4,700mAh battery with 33W fast-charging support.For connectivity, the handset should offer support for Wi-Fi, Bluetooth 5.0, GPS, a headphone jack, and a Type-C port.

The official pricing and availability details of the TECNO PHANTOM X will be revealed during its launch, which is expected to happen on July 1. However, considering the specifications and features, it will likely be priced around Rs. 25,000.