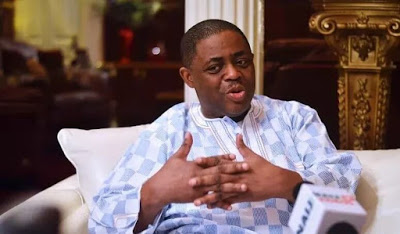 A chieftain of the Peoples Democratic Party, PDP, Chief Femi Fani-Kayode, has said that Vice President, Prof. Yemi Osinbajo may one day see himself thrown out of the Presidential Villa.

He wondered why the Vice President has refused to resign the position, since according to him, he (Osinbajo) has been reduced to a mere ‘flat spare tyre’.

In a series of tweets on Thursday evening, the former Aviation Minister highlighted all the challenges that the VP is currently facing in the second term administration of President Buhari.

Addressing to Osinbajo, Fani-Kayode tweeted, “Your boss @MBuhari left the country [to Russia] without transferring power to you.

“You have been stripped of all your power and authority and left with only 5 aides in the Presidency.

“Your Pol. Advisor has been directed to leave the Villa and report to the Ministry of Information and Culture.

“All the parastatals and agencies that were under you have been taken away and you are no longer involved in helping to determine economic policy.

“It appears to me that you have been skillfully and clinically castrated! How many more insults will you take before you resign?

“Must you wait till they hold you by the scruff of the neck and throw you out? Have you no self-respect, honuor or dignity left? You deserve to be pitied!”

Tension in Zaria over plans to outlaw beer