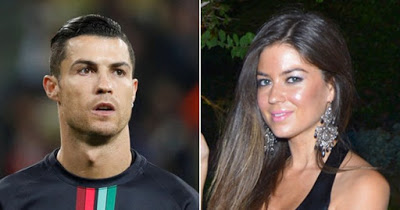 Football star Cristiano Ronaldo’s DNA matched evidence collected in a rape case that was dropped earlier this year, leaked emails claim. Ronaldo, 34, was told in July he would not face criminal charges over allegations made by former model Kathryn Mayorga, 34, that he raped her at a hotel suite in Las Vegas in 2009. In ‘100 pages’ of emails seen by The Sun that were sent between police and prosecutors during the US investigation, detective Jeffrey Guyer allegedly wrote: ‘DNA is back and is a match.’

The newspaper claims to have also seen emails that show Ronaldo told his legal team that Ms Mayorga had said ‘no’ and ‘stop’. Ms Mayorga claims Ronaldo raped her in the Hotel Palms Place after they met on a night out in Vegas and she agreed to go back to his room. She signed a non-disclosure agreement in January 2010 and refused to prosecute the Juventus player, instead accepting a settlement of £290,000. But last September, inspired by the #MeToo movement, Ms Mayorga broke the NDA by telling her story to German newspaper Der Spiegel. Las Vegas Police reopened the rape case on 2 October and the following day, dad-of-four Ronaldo branded the allegations ‘fake news’ on Instagram.

He also wrote on Twitter: ‘I firmly deny the accusations.’ In this June 2009 photo made available to the Associated Press on Friday Oct. 5, 2018, soccer star Cristiano Ronaldo is pictured with Kathryn Mayorga in Rain Nightclub in Las Vegas. A lawyer for Mayorga, who is alleging that Ronaldo raped her in Las Vegas in 2009 said her client was “emotionally fragile” and agreed to an out-of-court financial settlement nine years ago because then she never wanted her name made public. Mayorga filed a lawsuit last week in state court seeking to void the agreement she signed while accepting $375,000 to keep quiet about the alleged encounter.

In her interview with Der Spiegel, the former model claimed Ronaldo exposed himself in a bathroom she was changing in before asking her to perform a sex act. She claimed she refused but kissed him before Ronaldo started to ‘come on very strong’. She said: ‘I pushed him away and kept saying “No”.’ A day after the alleged attack she reported it to police who took DNA samples from her. She now claims Ronaldo’s legal team exploited her vulnerable mental state in order to get her to sign the NDA document. Whistleblowing website Football Leaks claims to have seen emails sent between Ronaldo and his lawyers which revealed the footballer admitted Ms Mayorga said ‘no’.

Three weeks later he stated: ‘She did not scream. She did not cry out or anything’, the website claimed. Pics shows: Georgina Rodriguez and Cristiano Ronaldo; SPAIN: Real Madrid star Cristiano Ronaldo’s WAG Georgina Rodriguez has been slammed on social media by residents in her hometown after she said she did not want to live there. Ronaldo with his girlfriend Georgina  The police investigation into Ms Mayorga’s allegations lasted 11 months before Nevada prosecutors decided in July not to pursue it.

Emails suggest the case was dropped because detectives could not be sure the documents published by Football Leaks were not altered. In response to the email leak, Ronaldo’s legal representatives denied the rape allegations and pointed to a statement made by his US lawyer Peter Christiansen last year, when a warrant for his DNA was issued.

See also  ‘You Are My Son, I Can’t Join Issues With You’ – Primate Ayodele Replies Femi Adesina

It said: ‘Mr Ronaldo has maintained that what occurred in Las Vegas in 2009 was consensual in nature, so it is not surprising that DNA would be present, nor that the police would make this very standard request as part of their investigation.’ They have also said that the case was based on ‘fabricated’ documents — the supposed notes between the footballer and his team which had been sold to Football Leaks. Ms Mayorga is reportedly now pursuing a civil case against Ronaldo, seeking damages of £165,000.